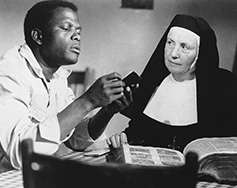 Paramount at the Movies Presents: Summer Classics – Lilies Of The Field [NR]

Perhaps The Most Extraordinary Story of Courage, Conflict and Devotion Ever Filmed!

Sidney Poitier plays Homer Smith, an aimless ex-GI who takes a temporary handyman job at a Southwestern farm maintained by five German nuns. It is the cherished dream of the Mother Superior (Lilia Skala) to build a chapel (or, as she says, a “shapel”). She is convinced that the personable Homer has been sent from Above to help her realise her dream. He protests loudly and rudely, but she will not be dissuaded. How Homer accomplishes her goal, endears himself to the surrounding townsfolk, and avoids an arrest for a previous crime, comprises the heart of Lilies of the Field. The film, adapted by James Poe from a novel by William E. Barrett, was later remade for television, and it won Poitier an Academy Award for Best Actor, the first time that award was given to an African-American.