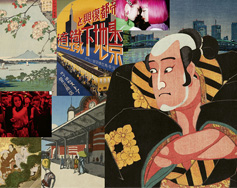 A thrilling encounter with one of the world’s great art capitals.

Based on a major exhibition at the Ashmolean in Oxford, Tokyo Stories spans 400 years of incredibly dynamic art – ranging from the delicate woodblock prints of Hokusai and Hiroshige to Pop Art posters, contemporary photography, Manga, film, and brand-new artworks that were created on the streets. The exhibition was a smash-hit five-star success and brought a younger and more diverse audience to the museum. The film uses the exhibition as a launchpad to travel to Tokyo itself, and explore the art and artists of the city more fully. A beautifully illustrated and richly detailed film, looking at a city that has undergone constant destruction and renewal over its 400-year history, resulting in one of the most vibrant and interesting cities on the planet.

“Tokyo has a powerful engine that just doesn’t stop. There is an energy, a particular floating power in Tokyo. Whatever happens, this city gets rebuilt again and continues to move forwards.”
Machida Kumi, artist