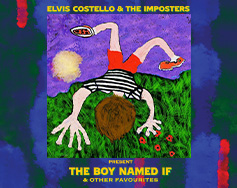 Born in London and raised there and in Liverpool, D.P. MacManus later came to be known as “Elvis Costello”. He has been performing in public for over fifty years, solo, with the pianist, Steve Nieve and with the bands Rusty, the Attractions, His Confederates – including two former members of Elvis Presley’s TCB Band – The Rude Five, an acoustic ensemble, The Sugarcanes, and his current ensemble, The Imposters.

Costello is a writer and part-time musician who made a number of records in the 20th Century, some of which are still remembered today, the most notable for many being the first five releases which were all produced by his friend, Nick Lowe and with whom he is always proud to share the bill and possibly a song or two.

Costello is a two-time Grammy Award winner – firstly with Burt Bacharach for the song, “I Still Have That Other Girl” as Best Pop Collaboration with Vocals in 1998 and then in 2019 for his 30th album release, “Look Now”, in the Best Traditional Pop category. Costello has received, a BAFTA award in collaboration with the composer Richard Harvey on the music for Alan Bleasdale’s eleven-hour drama serial, “GBH”, two Ivor Novello Awards for his songwriting catalogue and two Dutch Edison Awards, firstly with the Brodsky Quartet for “The Juliet Letters” and then with Anne Sofie von Otter for their collaboration, “For The Stars” and, perhaps most surprisingly, a 1989 VMA Award for “Veronica” as “Best Male Video”.

He is a member of both The Songwriter’s Hall of Fame and the Rock and Roll Hall of Fame. In 2020, Costello was awarded an O.B.E. for his services to music.

He holds two honorary doctorates in music, one from the University of Liverpool and another from the New England Conservatory. Despite this, he is known for playing the guitar with almost no regard for common sense.