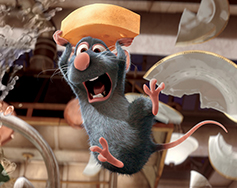 A comedy with great taste.

In one of Paris’s finest restaurants, Remy, a determined young rat, dreams of becoming a renowned French chef. Torn between his family’s wishes and his true calling, Remy and his pal Linguini set in motion a hilarious chain of events that turns the City of Lights upside down.