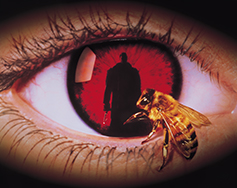 Entry to all ticketed events at The Paramount Theater requires proof of vaccination or proof of a negative PCR test within 72 hours prior to the performance date and time, along with a valid photo ID. Additionally, masks will be required for all individuals inside the Theater, regardless of vaccination status, except while actively eating or drinking in their seats.

You don’t have to believe… just beware.

Student Helen Lyle (Virginia Madsen) learns of the terrifying local legend of The Candyman – a hooked serial killer who appears when you say his name in a mirror, five times. Her investigations of The Candyman legend lead her to his fabled haunts. But, when she ignores locals’ warnings, a series of gruesome murders begin. Could the legend really be true?