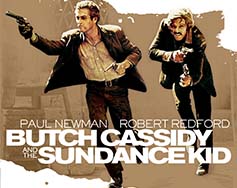 Paramount at the Movies Presents: Butch Cassidy and the Sundance Kid [PG]

Paul Newman and Robert Redford set the standard for the “buddy film” with this box office smash set in the Old West. The true story of fast draws and wild rides, battles with posses, train and bank robberies, a torrid love affair, and a new lease on outlaw life in far away Bolivia. It is also a character study of a remarkable friendship between Butch – possibly the most likeable outlaw in frontier history – and his closest associate, the fabled, ever-dangerous Sundance Kid. Paul Newman and Robert Redford shine in the roles that will forever identify them as suave, daring outlaws on the run who fall in love with the same woman (Katharine Ross).