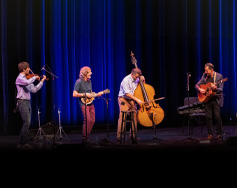 Expect to hear works from the genre-bending Short Trip Home album of many years ago, as well as new music written specifically for this tour.

Edgar’s son George is charting his own course in the musical world and represents the next generation of artists expressing their unique voices and perspective. He certainly has strong roots!

On a Bowling Green, Kentucky cattle farm in the post-war 1950s, Sam Bush grew up an only son, and with four sisters. His love of music came immediately, encouraged by his parents’ record collection and, particularly, by his father Charlie, a fiddler, who organized local jams. Charlie envisioned his son someday a staff fiddler at the Grand Ole Opry, but a clear day’s signal from Nashville brought to Bush’s television screen a tow-headed boy named Ricky Skaggs playing mandolin with Flatt and Scruggs, and an epiphany for Bush. At 11, he purchased his first mandolin.

As a teen fiddler, Bush was a three-time national champion in the junior division of the National Oldtime Fiddlers’ Contest. He recorded an instrumental album, Poor Richard’s Almanac, as a high school senior and in the spring of 1970 attended the Fiddlers Convention in Union Grove, NC. There he heard the New Deal String Band, taking notice of their rock-inspired brand of progressive bluegrass.

Shunned by some traditionalists, New Grass Revival played bluegrass fests slotted in late-night sets for the “long-hairs and hippies.” Quickly becoming a favorite of rock audiences, they garnered the attention of Leon Russell, one of the era’s most popular artists. Russell hired New Grass as his supporting act on a massive tour in 1973 that put the band nightly in front of tens of thousands.

A three-record contract with Capitol Records and a conscious turn to the country market took the Revival to new commercial heights. Bush survived a life-threatening bout with cancer, and returned to the group that’d become more popular than ever. They released chart-climbing singles, made videos, earned Grammy nominations, and, at their zenith, called it quits.

Bush worked the next five years with Emmylou Harris’ Nash Ramblers, then a stint with Lyle Lovett. He took home three-straight IBMA Mandolin Player of the Year awards, 1990-92, (and a fourth in 2007). In 1995, he reunited with New Grass Revival banjoist Béla Fleck (who joined the band in 1981), now a burgeoning superstar, and toured with the Flecktones, reigniting his penchant for improvisation. Then, finally, after a quarter-century of making music with New Grass Revival and collaborating with other bands, Sam Bush went solo.

He’s released seven albums and a live DVD over the past two decades.

Mike Marshall made his Carnegie Hall debut at the age of 20 with jazz violin legend Stéphane Grappelli as a member of the David Grisman Quartet. In 1985, he would perform in that famed hall with his own classical ensemble, The Modern Mandolin Quartet.

Mike has been at the forefront of New Acoustic music for over 40 years, having been the founding member of many groups including the Montreux Band, Psychograss, Choro Famoso, and The Anger Marshall Band. He is indeed a living compendium of musical styles and has the ability to seamlessly blend his American roots background with a deep understanding of European classical music, Brazilian choro, and other world music. Mike is a fluid Jazz improviser and a master on mandolin, guitar, mandocello, and violin.

Between 1999 and 2003, Mike collaborated with Joshua Bell, Edgar Meyer, Béla Fleck, and Sam Bush on two separate projects. These groups toured the U.S.A. extensively and performed at the Aspen Music Festival, San Francisco Performances and Chamber Music at Lincoln Center, NY. Both ensembles were nominated for Grammy Awards for their Sony Classical releases. In 2014, Mike was nominated for his third Grammy Award for his recording with the Turtle Island Quartet.

Currently, Mike is touring with German mandolin virtuoso Caterina Lichtenberg. The two have released two CDs on the Adventure Music label and have performed at the Carmel Bach Festival, The Savannah Music Festival, the Bach Haus Liepzig, Germany, and the Rockygrass Bluegrass Festival in Colorado and have been soloists with the New Century Orchestra under Nadja Salerno-Sonnenberg, and Orchester l’arte del mondo from Cologne, Germany. Their most recent recording is a CD of Johann Sebastian Bach duets performed on mandocello and mandolin.

In demand as both a performer and a composer, Edgar Meyer has formed a role in the music world unlike any other. Hailed by The New Yorker as “…the most remarkable virtuoso in the relatively un-chronicled history of his instrument”, Mr. Meyer’s unparalleled technique and musicianship in combination with his gift for composition have brought him to the fore, where he is appreciated by a vast, varied audience. His uniqueness in the field was recognized by a MacArthur Award in 2002.

As a solo classical bassist, Mr. Meyer can be heard on a concerto album with the St. Paul Chamber Orchestra conducted by Hugh Wolff featuring Bottesini’s Gran Duo with Joshua Bell, Meyer’s own Double Concerto for Bass and Cello with Yo-Yo Ma, Bottesini’s Bass Concerto No. 2, and Meyer’s own Concerto in D for Bass. He has also recorded an album featuring three of Bach’s Unaccompanied Suites for Cello. In 2011, Mr. Meyer joined cellist Yo-Yo Ma, mandolinist Chris Thile, and fiddler Stuart Duncan for the Sony Masterworks recording The Goat Rodeo Sessions, which was awarded the 2012 Grammy Award for Best Folk Album. Mr. Meyer was honored with his fifth Grammy Award in 2015 for Best Contemporary Instrumental album for his Bass & Mandolin collaboration with Chris Thile. His most recent recordings are a collection of Bach Trios with Yo-Yo Ma and Chris Thile released in 2017 and the 2020 Not Our First Goat Rodeo, a follow-up to the Grammy Award winning Goat Rodeo Sessions album.

As a composer, Mr. Meyer has carved out a remarkable and unique niche in the musical world. His most recent work, “New Piece for Orchestra,” was premiered and commissioned by the Nashville Symphony and the Aspen Music Festival and School in 2017.  That same year, The Academy of St. Martin in the Fields and the Bravo! Vail Music festival commissioned Mr Meyer to write “Overture for Violin and Orchestra” which was premiered by Joshua Bell and performed on the Academy’s 2018 US tour.

Collaborations continue to be a central part of Mr. Meyer’s work.  In 2017, Mr. Meyer collaborated with fellow bassist Christian McBride, showcasing their original music. Mr. Meyer’s previous performing and recording collaborations include duos with Chris Thile; a duo with Béla Fleck; a quartet with Joshua Bell, Sam Bush, and Mike Marshall; a trio with Béla Fleck and Mike Marshall; and a trio with Yo-Yo Ma and Mark O’Connor.

Mr. Meyer began studying bass at the age of five under the instruction of his father and continued further to study with Stuart Sankey. In 1994, he received the Avery Fisher Career Grant and in 2000 became the only bassist to receive the Avery Fisher Prize. Currently, he is Visiting Professor of Double Bass at the Curtis Institute of Music in Philadelphia.

George Meyer plays the violin and writes music. He has performed his own compositions in a variety of settings, including Chamber Music Northwest, Bravo! Vail, the Savannah Music Festival, the Aspen Music Festival, the Telluride and RockyGrass Bluegrass Festivals, the Charles Ives Concert Series, the Rome Chamber Music Festival, and the Kyoto International Festival. He has appeared in performance with his father Edgar Meyer, and with Mike Marshall, Sam Bush, Jerry Douglas, Fred Sherry, and Paul Neubauer.

Recent works include a trio for two violins and cello (6’), a duo for violin and viola (15’), a solo violin piece (7’) for Katie Hyun, and a duo for violin and bass (18’), co-written and performed with his father. He has been commissioned by Chamber Music Northwest, Astral Artists, and Bravo! Vail. In 2016, Quodlibet Ensemble premiered his Concerto Grosso, a 15-minute work for string orchestra with solo string quartet, in New York City.