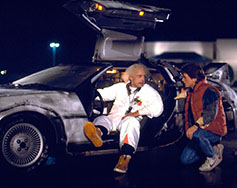 Paramount at the Movies Presents: Back to the Future [PG]

From Academy Award-winning filmmakers Steven Spielberg and Robert Zemeckis, Back to the Future is an unrivaled adventure that – 35 years later – stands the cinematic test of time.

Marty McFly (Michael J. Fox), a typical American teenager of the Eighties, is accidentally sent back to 1955 in a plutonium-powered DeLorean “time machine” invented by a slightly mad scientist. During his often hysterical, always amazing trip back in time, Marty must make certain his teenage parents-to-be meet and fall in love – so he can get back to the future.