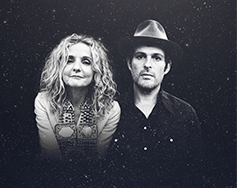 After a year of canceled shows, uncertainty, and solitude, Grammy Award-nominated Gregory Alan Isakov and Grammy Award-winner Patty Griffin are joining together for a 14-date co-headlining tour! These two profound American voices are celebrating their first live, in-person performances since early 2020 with an evening of story and song.

Gregory and Patty will each be performing their own set.

More About Gregory Alan Isakov: Born in Johannesburg, South Africa, and now calling Colorado home, horticulturist-turned-musician Gregory Alan Isakov has cast an impressive presence on the indie-rock and folk worlds with his five full-length studio albums: That Sea, The Gambler; This Empty Northern Hemisphere; The Weatherman; Gregory Alan Isakov with the Colorado Symphony; and Evening Machines (recently nominated for a Grammy award for Best Folk Album). Isakov has toured internationally with his band, and has performed with several national symphony orchestras across the United States.

More About Patty Griffin: Patty Griffin is among the most consequential singer-songwriters of her generation, a quintessentially American artist whose wide-ranging canon incisively explores the intimate moments and universal emotions that bind us together. Over the course of two decades, the GRAMMY® Award winner – and seven-time nominee – has crafted nine classic studio albums and two live collections, a remarkable body of work in progress that prompted the New York Times to hail her for “[writing] cameo-carved songs that create complete emotional portraits of specific people…(her) songs have independent lives that continue in your head when the music ends.”