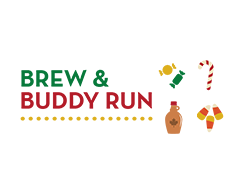 Whether you’re an Elf enthusiast, a thrill-seeker, or even a son of a Nutcracker, The Paramount’s 6th Annual Brew & Buddy Run presented in partnership with Champion Brewing Company and Three Notch’d Brewing Company is sure to get you in the holiday spirit!

All individuals must provide a signed waiver in order to receive a wristband for run participation. Waivers will be available on-site during registration, or you may download a copy and bring a completed form with you to skip this step of registration.

All Brew & Buddy Run ticket purchasers will receive an email closer to the event date with more details and instructions on run participation. The run begins at 4:20PM, and the movie begins at 6:15PM.

*The registration fee for the run includes a 2022 Brew & Buddy Run souvenir cup, one free pour at each participating brewery, $1.00 off beer purchase at The Paramount’s concessions, and admission to the 6:15PM presentation of Elf. 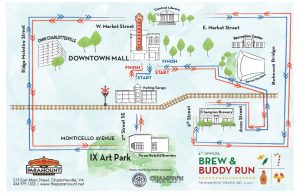 FOOD DRIVE
In conjunction with our annual Brew and Buddy Run, The Paramount Theater will be hosting a food drive to benefit the Blue Ridge Area Food Bank. Attendees are encouraged to bring non-perishable items to donate to the food bank, and The Theater will have collection bins setup in the lobby throughout the event.

ABOUT THE BRAFB: The Blue Ridge Area Food Bank serves 25 counties and 8 cities on either side of the Blue Ridge through distribution centers in Charlottesville, Lynchburg, Winchester, and Verona. It provides nutritious food to 109,500 people on average each month through a far-reaching network of more than 400 community partners–food pantries, shelters, soup kitchens, and program sites like schools, community centers, and health care clinics.

All food donations should be non-perishable, with no glass containers. Items in high demand right now include: dairy items such as canned, evaporated, or powdered milk; 100% fruit juice in boxes and cans; low- or no-sodium canned vegetables; canned fruits in light syrup or fruit juice; boxed pasta; rice; cereal; canned soups and stews; and macaroni and cheese. Here is a list of their most needed items.

“This is one of those rare Christmas comedies that has a heart, a brain, and a wicked sense of humor, and it charms the socks right off the mantelpiece.” Roger Ebert