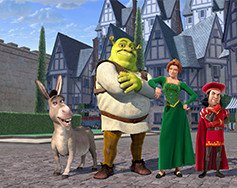 *11:30AM Sensory-Friendly Screening: This screening will aim to provide a positive viewing experience that is welcoming to all families, including those with children with autism or other sensory sensitivities. While the film will be shown as produced, you will notice special accommodations such as lower sound levels, especially for startling or loud sounds, and house lights remaining on at a low level during the screening. For more information, please call the Box Office at 434.979.1333.

Winner of the first Academy Award® for Best Animated Feature (2002), Shrek sparked a motion picture phenomenon and captured the world’s imagination with…the Greatest Fairy Tale Never Told! Shrek (Mike Myers) goes on a quest to rescue the feisty Princess Fiona (Cameron Diaz) with the help of his loveable Donkey (Eddie Murphy) and win back the deed to his swamp from scheming Lord Farquaad.