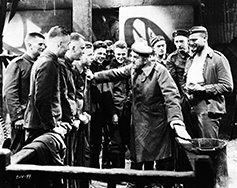 Paramount at the Movies Presents: All Quiet on the Western Front [NR]

Relive the drama, conflict, and power of one of the most influential anti-war films ever made. Universal’s first Best Picture Academy Award® winner follows a group of idealistic young men as they are talked into enlisting in the German Army at the beginning of World War I by their jingoistic teacher and are sent to the Western Front. The story is told entirely through the experiences of the young German recruits and highlights the tragedy of war through the eyes of individuals.