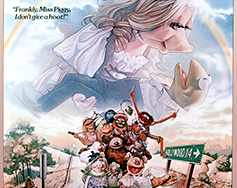 Paramount at the Movies Presents: The Muppet Movie [G]

For the young, or young-at-heart, we will have Muppet tattoos available pre-show and a coloring station set-up in the Lobby!

After a chance meeting with a great talent scout, Kermit goes to Hollywood dreaming about the world of show business. Along the way, Fozzie, Gonzo, and Piggy join him in hopes of also becoming big stars. But everything goes awry when Kermit falls into the clutches of Doc Hopper (Charles Durning), a villain who wants to promote, at all costs, its network of fast food that sells fried frog legs!