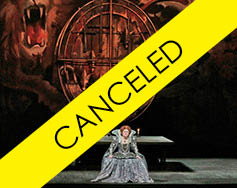 A pseudo-historical opera about Mary, Queen of Scots, and her bitter rivalry with Queen Elizabeth I, Donizetti’s drama thrills with intense stand-offs and impressive vocal displays. Soprano Diana Damrau and mezzo-soprano Jamie Barton square off as two of history’s most formidable monarchs, with Maurizio Benini conducting.

Please join us for a complimentary pre-opera lecture in The Paramount Theater Auditorium at 12:00PM.  The lecture for Maria Stuarda will be conducted by Mary Ann Archer, flutist, formerly with the Metropolitan Opera Orchestra for 26 years and author of a book on meditation entitled Shared Imagination.