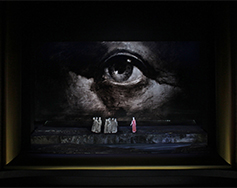 Please join us for a complimentary pre-opera lecture in The Paramount Theater Auditorium at 12:00PM.  The lecture for Der Fliegende Holländer will be conducted by Artistic Director of Victory Hall Opera, Miriam Gordon-Stewart.

Production a gift of Veronica Atkins