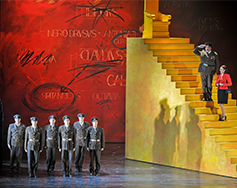 Please join us for a complimentary pre-opera lecture in The Paramount Theater Auditorium at 12:00PM.  The lecture for Agrippina will be conducted by Tim Snider, attorney and host of WTJU’s Sunday Opera Matinee.