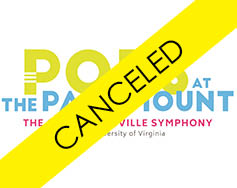 The Charlottesville Symphony Presents: Pops at The Paramount – The Star Wars Concert – Canceled

John Williams is history’s greatest film composer, and the Star Wars scores are his magnum opus. He was the one and only constant, writing fifty iconic themes that are woven throughout all nine feature films.

Music Director Benjamin Rous leads the full Charlottesville Symphony in music from this sprawling galactic franchise including The Imperial March, Rey’s Theme, The Rebellion is Reborn, Luke and Leia, Yoda’s Theme, and much, much more!

Audience members are encouraged to come dressed as their favorite Star Wars character.

Please Note: Performance will not feature film clips and John Williams will not appear.